Do you know the meaning of consignee in international shipping?

Do you know how a consignee can affect your international business?

Well, if you are dealing in international trade and shipping goods internationally, there are some parties involved in the entire process. One of them is known as a consignee!

The term “consignee” is often mistaken or confused with other shipping terms by many people. Therefore, it is not only important to know consignee meaning, but also the roles & responsibilities of a consignee ininternational trading.

In this article, we are going to clear all your doubts regarding consignee, their roles and responsibilities. So, let’s dive right in!

Chapter 1: What does consignee Mean in International Shipments?

Chapter 2:  Which Parties are Involved with Consignee?

Chapter 3:  What are the Responsibilities of a Consignee in International Trading?

Chapter 1: What does consignee Mean in International Shipments? 1. What is Consignment in Trading?

In simple words, the concept of the consignment can be defined as the procedure in which an individual gives over anything to the custody of the other party while keeping complete ownership until that asset or property is sold.

So a consignment is like an arrangement which will result from a contract between two parties. In that contract one person is consignor who is a supplier or shipping company who either ships the goods themselves of entrusts the goods to another.

The consignee on the other hand is the person who will receive these goods. That means his name appears as the person to whom the goods will be delivered.

However, this is important to understand that the consignor does not give up ownership of the goods until they are sold. 2. What is the Meaning of Consignee in Shipping terms?

Now you have understood the concept of consignment, let’s understand consignee meaning. The consignee can be defined as the party that receives items from the owner, keeps them, and undertakes to sell those on the owner’s behalf.

So a consignee is also the buyer of the goods because he is buying the goods from the consignor and the whole arrangement is called as the consignment.

Therefore, a consignee should understand his roles, duties and rights before dealing with other parties. When the contract is made, complete information about the consignee is mentioned in the bill of lading.

3. Which other terms have the same Meaning as Consignee in Trading?

Now you know consignee meaning; you should also know the other terms used for referring a consignee. Well, a consignee is typically called the “receiver of goods” in international trade.

Other than that, he can also be called the “buyer” when he purchases ownership rights from the owner before further selling to a third party. A consignee can also be known as the “customer” for the owner of products.

4. Why is Consignee Important in Shipping?

As now you know that the consignee is one of the most important parties involved in a shipping agreement. After all, this is the person who must be pleased by the seller in order to be compensated.

Consignees have the power to quickly move their business somewhere else if they are dissatisfied with the service given. As a result, businesses must go over and beyond to satisfy the consignee in every transaction. Therefore, managers must maintain constant touch with the consignee or other team members during any transaction. To ensure positive outcomes, they may give shipment updates and customer service.

People usually confuse or misunderstand these two different terms. However, it’s essential to know the differences between consignor and consignee. 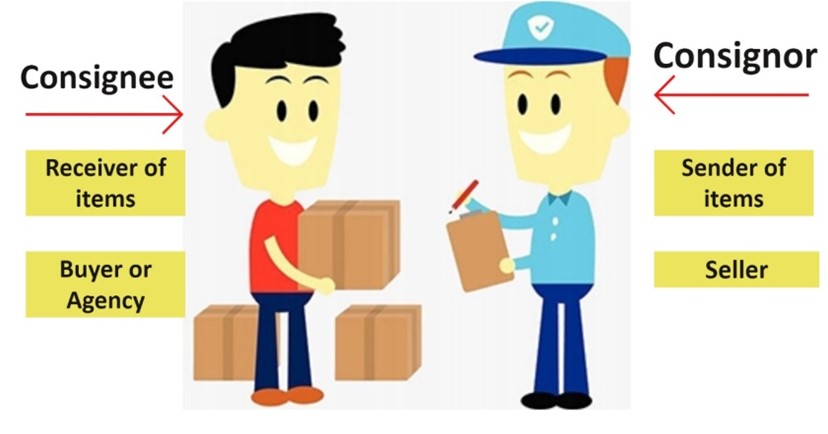 The buyer-seller relationship works because of these characteristics, allowing a consignor’s products to transport or sold to the consignee successfully.

So, let’s understand the actual differences between the two parties by following points:

6. What is Third Party Consignee?

In most cases, the seller sends the items straight from the manufacturer to their customers for saving additional money on inventory and shipping expenses.

For business reasons, the sellers may not want the consignee to know the true commercial worth of their shipment.

Here’s how the third-party consignee service helps! By using this service, you can transport products to the consignee without adding a commercial invoice.

This service also allows for quicker shipping costs as well as reduces handling and warehouse expenses at the destinations.

Chapter 2:  Which Parties are Involved with Consignee? Now you have understood consignee meaning and its important role in shipments. Let us tell you that from start to finish, each supply chain has several parties involved. Well, the consignee also works together with some other parties to make international trade a success.

Earlier in the section of consignee meaning, we have explained the difference between a consignor and consignee. Now you have known that the consignor is the sender of goods, and his role is to ship the goods to the buyer.

The consignor serves as one of the main parties involved with the consignee while dealing in international trade.

The Carrier is referred to as the party who actually moves the cargo. This party is responsible for the delivery of goods from the seller to its destination. This might be an individual owner-operator party or a person working for an enormous fleet.

The Carrier’s role is to receive the bill of lading and convey the products to the consignee in a secure manner. In some instances, such as a hectic warehouse environment, a consignee might not be able to inspect or receive shipments physically. Here comes the notify party.

As the name suggests, notify party is the one who gets a notification when the cargo reaches its destination.  In case of an overseas shipment, the notify party must additionally organize customs clearance.

OS&D clerk is responsible for receiving, inspecting and managing claims. Typically, the OS&D clerk works from the consignor’s warehouse and with other employees of the shipping department.

Now you know the consignee meaning and with whom the consignee interacts, let us explain the significant responsibilities a consignee has to fulfil in international trade.

Chapter 3:  What are the Responsibilities of a Consignee in International Trading?

As of now, you know that a consignee is involved with many other parties in international trade. He is a person who will receive a shipment of products. Therefore, he or she has specific legal responsibilities towards other parties that are outlined in the law.

Because products are frequently transported worldwide, international rules are also to be fulfilled by the consignee. Let’s have a look at the following primary responsibilities a consignee has:

1. Provide complete information of Products he wants to the seller

The first responsibility of a consignee is to provide complete details about product specifications he wants to buy from the seller.

The consignee should give precise requirements of products; otherwise, he can get the wrong products in his hands resulting in a dispute with the seller.

2. Cover Freight Charges as agreed with the seller

3. Inspection of Shipment for Missing or Broken Goods

The consignee, after receiving the goods, is also accountable for inspection the products are in good working condition, as specified in the bill of lading.

As a result, when the shipment arrives, the consignee will check the full cargo and identify any broken or missing goods.

4. File Claim upon Shortage or Damage of Goods

Once the shipment arrives, if products are found to be short of the quantity, broken or damaged, the consignee must make a claim with the Carrier as soon as possible. The Carrier will be responsible for conveying the request for compensation or return of the wrong cargo.

Another important obligation a consignee holds is to ensure the shipping documents are correct and complete as per agreed terms with the trade parties. After verification, the consignee will sign receiving documents, and the ownership of the goods will be transferred to him.

7. Clear the goods in the Destination Country

Once the goods arrive in the destination country, it is also the responsibility of the Consignee to clear the goods himself or make arrangements through third parties to get the goods cleared.

With increased worldwide trade and a variety of business techniques, the consignee must perform the responsibilities mentioned above and roles in a timely manner for any business transaction to be completed successfully.

If a consignee fulfils his responsibilities effectively and efficiently, he can enjoy numerous benefits explained below. 1. Is it necessary for the Carrier to listen to the consignee?

It is true that the consignee is a necessary party, but it does not mean that the Carrier has no power. In certain situations, consignees might be hard to deal with and can become excessively demanding.

For instance, they might claim that any goods or items were broken while shipping even if it was not. Or they might seek requests that contradict the terms of the shipping contract at the time of delivery. In case of any dispute, the Carrier should always follow what is stated in the bill of lading.

2. Is it true that all Consignors are Sellers?

Not all consignors need to be the seller of products. In some conditions, it happens that a seller contracts with a third party to organize the packaging and transportation of products.

In this case, that third party will become the consignor and ship products accordingly. Furthermore, the buyer will deal with the seller, not the consignor (who can either be a seller himself or the 3rd party).

However, all these terms will have to be approved before the sales agreement between the buyer, and the seller is affected.

3. Is it true that all Consignees are Buyers?

Yes, in simple terms we can say that Consignee is usually the buyer of the product or in case of China; he is also the importer of the product. Sometimes there are other 3rd parties also involved in this process.

4. Is the Notify Party and the Consignee the Same Person?

Usually, the consignee, as well as the notify party, are the same person. However, they both can also be two different parties in a contract.

The consignee could be the notify party or a third-party that has been tasked with clearing and transferring the sent items to the consignee.

When the Notify party is a third person, the name and address of that party will appear on the bill of lading. In this case, the shipping company will follow the consignor’s instructions.

5. How can you Change a Consignee from a Bill of Lading?

If the discrepancy is discovered before the submission of documents to the bank of the supplier, corrections can be made by submitting all originals to the vessel owner’s agent.

The sooner the parties notice the discrepancy, the smoother the process will be. In some situations, such as with an international shipment, you may need to obtain approval from customs clearance.

6. Can a Shipment have Multiple Consignees?

There might be several consignees for a shipment. There is also the possibility of an ultimate consignee who serves as the last recipient of the products. They shall be considered the owners of the products for the objectives of customs declaration and payment of duties and taxes.

Suppose you are dealing in an international business or you want to ship products internationally. In that case, it is important to understand the concept of the consignee and how you can get the service securely through a consignment agreement.

Moreover, you should also know the other parties involved in international business so that you can successfully execute a trade agreement. How to Build a Brand Successfully? Essential Tips to Start a Good Business

How to Improve Your Profits by Managing Amazon Inventory?

What are the Newest Trends in Pet Toys Market? 10 Hot-selling Pet Toys